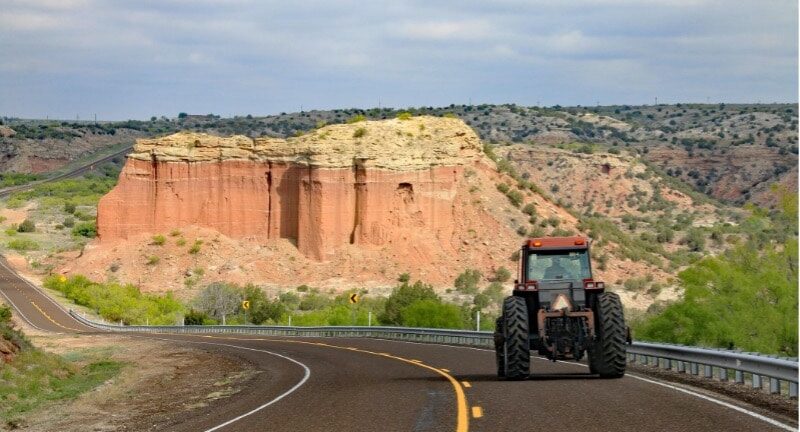 Some Kind of Normal!

Our destination for this road trip on May 15, 2021, was the Goodnight Ranch Historic Site via FM 207 (from out of Lubbock).

Naturally our route is seldom direct, with short side excursions. This journey took us across six counties – Lubbock, Hale, Floyd, Briscoe, Armstrong and Swisher – with only enough time to explore the Armstrong county seat. Along the way, we saw many places that today are only dots on a map.

We took FM 2286 east out of Plainview. A 1907 postal map shows towns along the way – Cereal, Sterley and South Plains.

There is only a grain elevator left at Cereal along with the homestead of Herman Quebe who moved to Floyd County in 1922 and which is still farmed by a Quebe. Cereal was at the intersection of 2286 and 2301. Sandy’s earlier shot of the elevator had earned Honorable Mention at the 2020 High & Dry Exhibit; we replicated the photo in color.

Constructed in 1974, Lake MacKenzie opened to the public in 1976 and furnishes water to the municipalities of Floydada, Lockney, Silverton, and Tulia with 70 miles of pipelines. The lake is named for Col. Ranald S. Mackenzie; in 1874 he commanded the 4th U.S. Cavalry and camped in this area before their decisive battle against the Comanche in Palo Duro Canyon. Today, the lake provides a variety of on- and off-water recreational activities.

Highway 207 cuts across Palo Duro Canyon and winds its way through the valley of the Prairie Dog Town Fork of the Red River in Armstrong County.

This section of Highway 207 is also known as Hamblen Drive, named after Will H. Hamblen (1876–1952), a local rancher. The Hamblen Family called their place Mesquite Flat and the mesquites everywhere were leafed out in bright green. (Sadly, historic markers seem to be preferred targets for nefarious shooters.)

Charles Goodnight and his business partner John Adair established the JA Ranch, the first cattle ranch in the Texas panhandle in 1877 in the Palo Duro Canyon area. In 1887 Charles built a spacious Victorian-style two-story ranch house. The Goodnight home is restored on its original site and features a 268-square-foot second-floor sleeping porch with spectacular views of the countryside and the nearby bison herd that are actual descendants of the herd raised by Charles and Mary Ann Goodnight.

Captain Woodrow F. Call and Gus McCrae in the novel “Lonesome Dove” by Larry McMurtry are loosely based on Charles Goodnight and fellow cattleman Oliver Loving. In truth, Charles Goodnight’s real life was more interesting than the fictional Woodrow Call.

As you travel throughout the Texas Plains Trail Region, peel your eyes to look for tall arrows. The one at the Goodnight House was the only one we saw today. They denote places and town that have historic ties to Quanah Parker, the Comanche and other Plains Indians .

The nearby community of Goodnight has a community center and the local cemetery.

In 1890, towns of Goodnight and Claude competed for the county seat, with Charles Goodnight casting the winning vote for Claude. Many scenes of the 1963 film “Hud” with Paul Newman were filmed at the two towns.

The square around the 1912 courthouse is lined with historic markers about notables in Armstrong County.

The Gem Theater was built in 1915 and called the Claudia. It has been renovated and is the site of live performances. The Armstrong County Museum occupies several buildings; the typical one-room school was moved to the museum and renovated.

Vigo Park on FM 146 in Swisher County was named for two counties in Indiana – the former homes of the settlers recruited by the Indiana-Texas Land Company about 1906.

Off a dirt road a mile west of Vigo Park is a signless cemetery. Bessie Hall was the first interment in 1908. The cemetery is maintained and still in use – and one of the few treeless cemeteries.

As “tombstone tourists” we enjoy seeing the different headstones and wondering about people and their lives. A row of cement blocks marked graves of babies (left, bottom row). Minnie and James were among the first settlers in 1908 (center, bottom row). Rest in peace Rex Don (right, bottom row).

As Charlie and Roger Miller tell us “you can’t roller skate in a buffalo herd” but, if you remain curious and adventuresome, “you can be happy if you’ve a mind to!”

Stay open to possibilities;
you never know what will appear
in front of you or
lie around the next curve.

Text of Historical Marker: Archeological Sites at Mackenzie Reservoir and Tule Canyon
Before this area was covered by Mackenzie Reservior, evidence of human occupancy was found at 77 recorded archeological sites. The earliest artifacts date back 10,000 years to a bison kill. Prehistoric occupancy is indicated by burial sites, shallow hearths, and stone tools. Gun flints, glass beads, and metal objects confirm 18th century European contact. By 1874 Colonel Ranald S. Mackenzie’s 4th Cavalry had driven the Indians from the Tule Canyon area which had been a lush grazing ground for buffalo and antelope. (1979)

Text of Historical Marker: Hamblen Drive
Named for Will H. Hamblen (1878-1952), who in 1890’s pioneered a crude road (about 6 mi. N) into Palo Duro Canyon along old Indian trails. This cut 120 miles off settlers’ trips to courthouse in Claude, but was steep and dangerous. Hamblen and his wife, Ada (1883-1955) ranched near Wayside after 1905. He worked unceasingly to get a passable road through Palo Duro. Elected county commissioner in 1928, he at last had a graded road built. By decision of the commissioners’ court, road was dedicated in 1930 as Hamblen Drive. With its paving in 1954, a dream of a lifetime was realized. (1968)

Text of Historical Marker: The S. P. Hamblen Family
Pioneered at this site, in dugout to the west. S.P. Hamblen (1846-1930) and wife Virginia Ann (1861-1950) settled in Lakeview area (9 mi. S of Claude) in 1889. Hamblen helped establish Lakeview School, 1890. He engaged in farming and stockraising, and also dealt in cedar posts cut in Palo Duro Canyon and sold in Amarillo at 3 cents each. Hauls over the old Indian trail were made with such great effort that W.H. Hamblen (oldest son, who helped his father) longed for good roads and later was designer of Hamblen Drive. Mrs. Hamblen, at home with her children, tended the ranch, courageously protecting family from the prevalent rattlesnakes, and repulsing vicious lobo wolves that attacked the young cattle. The Hamblens lived at this site, known as Mesquite Flat, in 1901-1902. The father and older sons, W.H., David and Claude, put up corrals and a barn, and then built the rockwalled 24 x 36-foot dugout. The tenth child of the family, Luther Ray Hamblen, was born in the Mesquite Flat dugout on March 3, 1902. Moving from this place, the Hamblens sought the best location for educating their children, who in the tradition of their parents became respected citizens of the west. (1970)