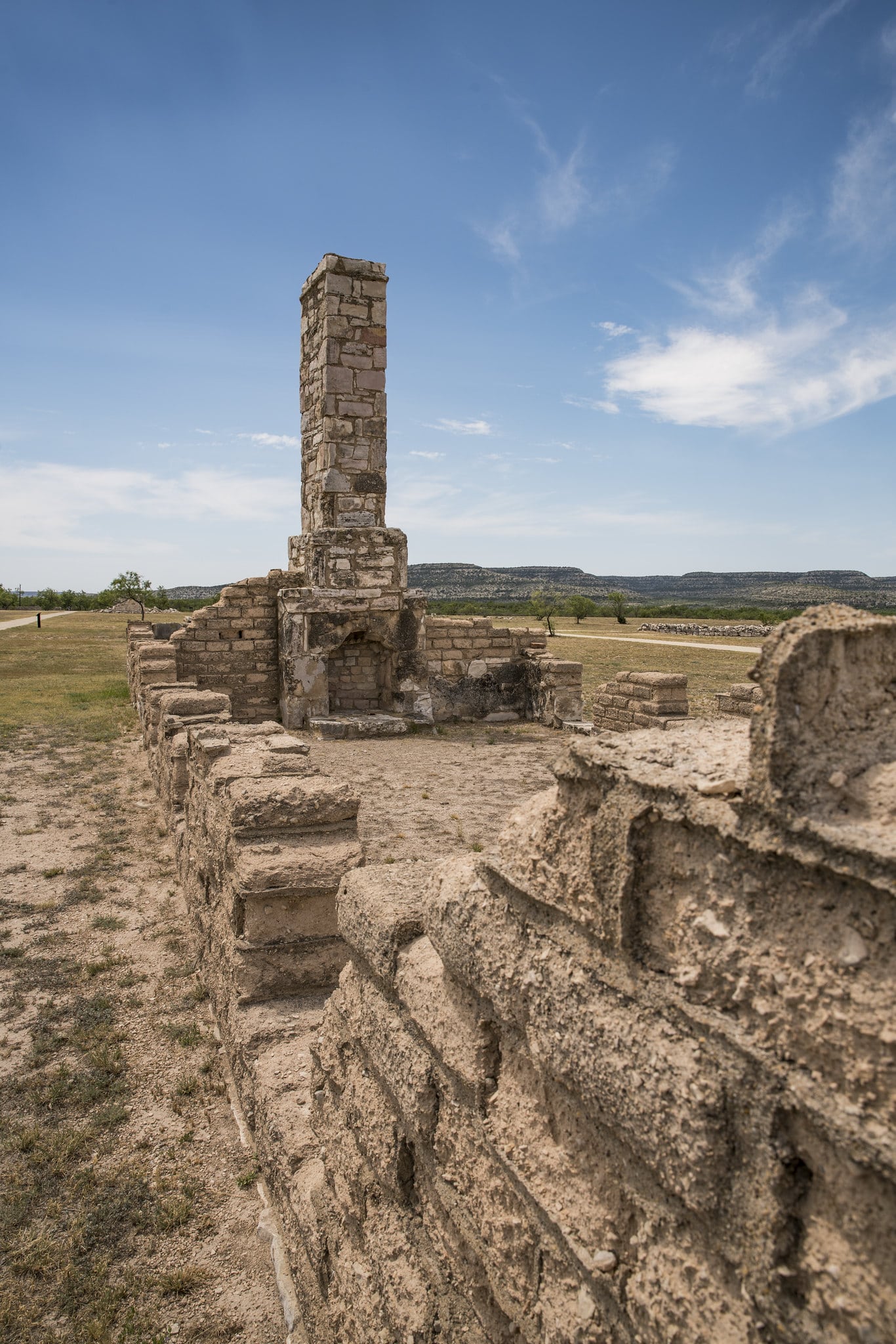 Accordingly, Camp Lancaster was established on August 20, 1855, on Live Oak Creek in West Texas with one hundred six infantrymen. The camp was upgraded to a fort in 1856. Abandoned by federal troops at the beginning of the Civil War, it was occupied by Texan and Confederate forces trying to protect the frontier. Post-Civil War, the fort was a sub-post to Fort Stockton and was permanently closed in the late 1870s.

The first buildings of Fort Lancaster were jacales: primitive buildings made from materials around the area and not very protective from the elements.  A short time later pre-fabricated parts of experimental modular buildings, U.S. Army “Turnley Portable Cottages”, were hauled by wagon from the railhead in San Antonio and erected at the site. Later, most of the buildings were constructed of limestone found around the area and adobe bricks. Roofs were made of thatch; a few were covered in shingles with square-cut iron nails. After the fort’s closure, much of the stones and other building materials were used for buildings in the vicinity and particularly to help build the nearby town of Sheffield.

Following its use as a military installation, the land reverted back to private property. In 1965, the Henry E. and Claude W. Meadows families and the Claire Benckenstein family donated 39 acres of the site to Crockett County. Three years later, the property was donated to the state and came under the management of Texas Parks and Wildlife Department; an additional 43.7 acres containing other fort structures were deeded to the state. The 82-acre site opened to the public in 1969.

The first archeological investigation of Fort Lancaster began in 1966 by personnel from Southern Methodist University. A significant number of artifacts dating to the mid-19th century military occupations were found. The next archeological investigation was done by the Texas Archeological Salvage Project of the University of Texas at Austin in 1971. The archaeologists conducted excavations and mapped the fort site for structures. During both of these projects 38 different buildings that made up the fort were located. Additional mapping and testing was done in 1974, 1975, and 1976.

When the fort was excavated there was not a complete building left of the fort; however, archeologists were able to find the footprints for most of the buildings. The use of drawings from 1856 and 1860 helped the experts determine and match building locations.

Other findings were thatch, adobe, limestone, and wood.  Archeologists also found fragments of glass, pieces of pottery and square-head iron nails. Charred remains were found in some of the buildings indicating some of the fort had been burned at some point.

Today, Fort Lancaster is located off Highway 290 between Ozona and Sheffield within the Texas Pecos Trail Region and is a state historic site operated by the Texas Historical Commission. The visitor center features a museum and exhibit area portraying the fort’s history. Interpretive signs are located along the trails connecting the ruins of over 30 permanent buildings—including a blacksmith shop, hospital, sutler’s store, and bakery.

Stories for Another Time:
Fort Lancaster and Portable Buildings, Camels and An Indian Attack