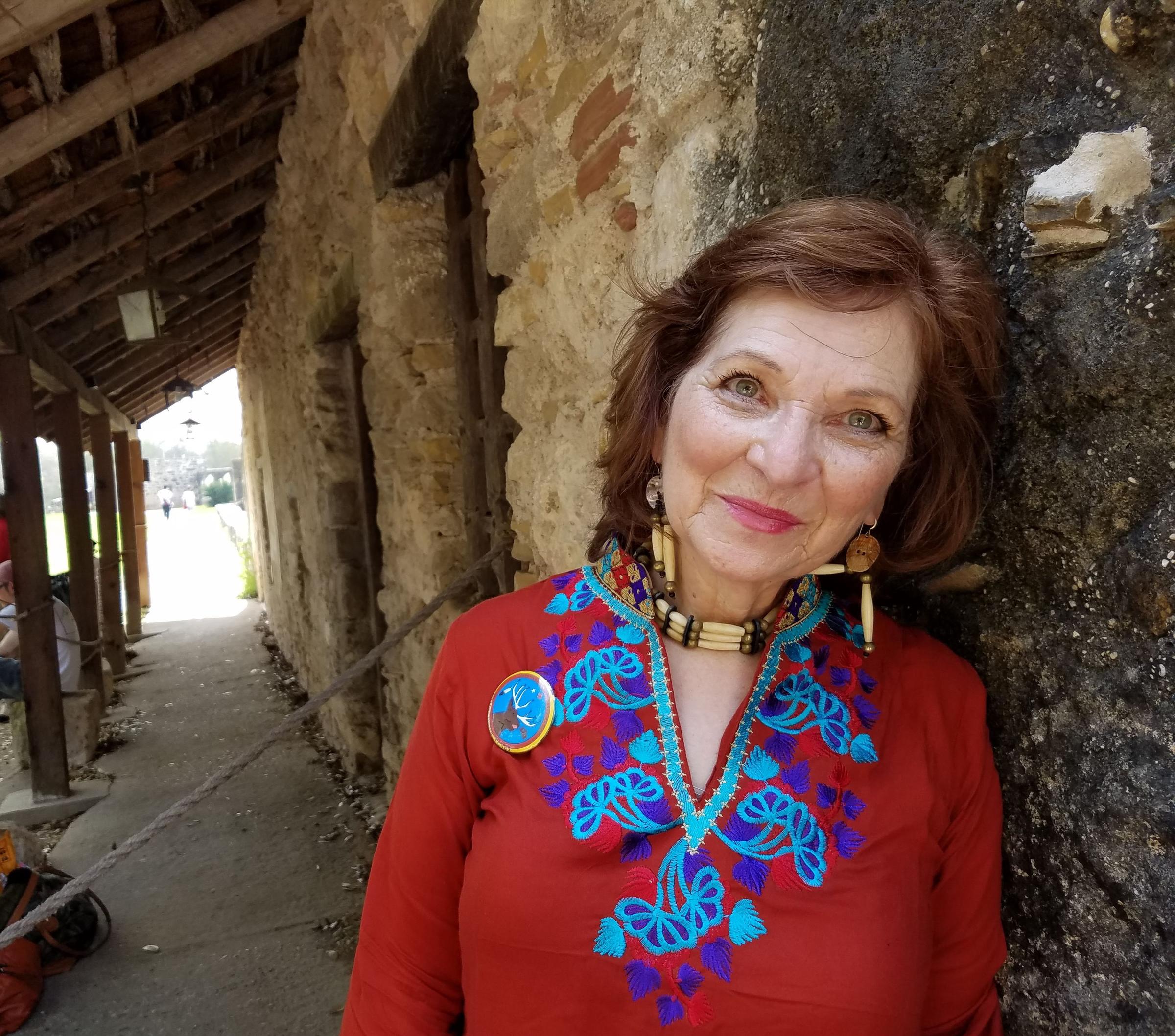 Sometimes the best guide to our shared history is a poet.

Carmen Tafolla was born and raised in the West Side barrios of San Antonio, among what she terms “the forgotten people,” and has devoted herself — in her writing — to telling their stories.

Tafolla earned a Ph.D. f rom U T-Austin in 1982, then returned to her hometown, where she’s now a professor of bicultural-bilingual studies at UT-San Antonio. Along the way she’s published more than 20 books, including her seminal collection of poems, This River Here: Poems of San Antonio. She served as the first Poet Laureate of San Antonio from 2012–14 and was Poet Laureate of Texas for 2015–16.

“In a lot of ways, I’ve lived my life in the vanguard — of the Chicano movement, the women’s movement, bilingual education,” Tafolla told the San Antonio Express-News. “And right now is as relevant a time as ever for seeking to liberate and empower people who are living in the shadows.”

Tafolla reminds us, when she discusses the Hispanic roots of Texas, that this part of the country “has been English-speaking for a little more than a century and a half. But it was Spanish-speaking for almost three centuries, and it was filled with the rich sound of indigenous languages for about eight centuries before that.”

Tafolla describes her own native language as Tex-Mex, “a code-switching combination of English and Spanish that could express the realities of our bilingual, bicultural experiences.”

I’m a fan of Tafolla’s richly layered poems, spangled with lyrical images and non-English vocabulary. So I knew that when she was plied with questions about Texas’ multicultural heritage, her answers would flow with a rhythm and wisdom that shouldn’t be subjected to paraphrase. I can tell you in two words: the river.

It’s what has always been the heartbeat of this city. It’s not just a river; it’s a stream of life, full of millennia of our stories. Our shards and our bones for the last 12,000 years are in its silt. And its slow, rippling water, under mesquite trees and cypress, sings the song of our history.

From its origin story as a place where the young Indian leader Yanaguana gave her life to save her people and made water sprout from the ground at the now-head-waters of the San Antonio River to the early indigenous settlements that lived and loved and raised their families here; from the Españoles, the Mexicanos, the Germans and Polish; from the early bathhouses here all the way to its urban rediscovery as a Riverwalk and later its world discovery during HemisFair, this river is what represents the gentle, life-giving kindness of this city and its stubborn insistence on survival.

Tell us a bit about growing up in San Antonio.

I grew up in a low-income neighborhood where we knew the meaning of “Canta y no Llores” [“Sing and Don’t Cry”]. For more than a century, our ethnic group — and the entire West Side it inhabited — had been the poor side of town, discriminated against and ignored, except at election time, when buses rounded up the inhabitants, handed out tamales, took them to the polls to vote for the candidate and dropped them back in their barrios. When long- term congressman Henry B. González, for whom our convention center is now named, ran for office against a Mr. Goode, one of the many beer-and-tamales politicians, he used a slogan: “Drink Goode’s beer and eat Goode’s tamales, but go to the polls and vote for González.”

González won and became a congressman noted for his character, his courage and his longevity in political office. In my neighborhood, González was a hero, and people bragged about him like they would a favorite cousin.

Why does Texas’ multicultural past matter today?

If we don’t know where we came from, how can we know where we’re going? Our past is always inside us. If we embrace it, we become full, rich and authentic. If we attempt to hide it, we lose spirit, lose personal power.

All of that cultural wealth weaves into a stronger fabric, explains much of who we are and who we yearn to become. It gives us deep roots, and that gives us options and resilience.

I like to remind people that the corn tortilla taco they’re crunching into, the aroma of the tamales warming their smile, will all be enhanced and taste better if they remember that people have been eating those delicacies here on this land for at least seven millennia! It makes your food taste better and your life feel more important if you know you’re tast- ing history in every bite.

There’s another facet of knowing heritage goes deeper here than just the battle of the Alamo. When people and their history are ignored, they are, in effect, “disappeared.” Their voice is stolen, and their existence is depreciated. When our history is recognized, we gain in social and personal value. And it becomes a more honest telling of history. When a people’s history and arts document their lives and emotions, they’re empowered to bloom and to feel fully a part of their world. Given that Latinos are a huge part of every state and major city in this nation, this is an American story. It’s how America came to be here.

What aspects of heritage are most central to appreciating the real San Antonio — and the real Texas?

Poetry! It goes back in everything from our corridos and our ballads to our legends … something taught to us when we were tiny, in the laps of grandmothers, and oral lit- erature, in stories that are now 500 years old, like La Llorona.

The arts are crucial to reclaiming voice — so catch an event at the Guadalupe Cultural Arts Center, or watch a play like Las Nuevas Tamaleras.

Our music is an extension of those poetic lyrics, and the corridos are our history books, told via music. Go to the Tejano Conjunto Festival and hear the songs that dance between two languages and 100 cultures. And celebrate a 7,000-year-old delicacy by joining in on La Gran Tamalada and the Tamales Institute.

But especially, remember the essence of Indo-Hispanic culture — that we treat others with respect, that when we see others who are different or think different or act different from what we do, we shrug our shoulders, say “Es su modo” [“It is your way”] and value diversity as the rich treasure of possibilities that life offers us to select from.

We are, historically and culturally, a kind city and a kind state — the land of the Tejas Indians, the friends.

The Alamo is at the center of a great deal of discussion and debate today, as it has long been. How would you define that iconic place and its meaning for visitors today?

We need to see San Antonio as a center of civil rights and human justice, as a place bent on multiculturalism, surviving because of multiculturalism … in spite of oppressive forces.

How does a big city like San Antonio preserve its distinctive character in the face of needs for increased housing, transportation, goods and services?

For many decades, major national statisticians said it was impossible for a city our size to survive on the amount of industry we didn’t have.

It’s ironic now that our biggest industries are tourism and health, with a good measure of proceeds coming in from the arts. People flock here to breathe in the peaceful, festive spirit of this river and the loving welcome it has always given strangers. It opens its arms and becomes the equalizer in a mestizaje of diverse human experience. It’s good medicine.

excerpted from
The Storykeeper: Instructions from an Historian

…Look in the places where ink does not show.
In the breaking voice between the lines of a song.
Our history is written in that song, written on the voice, sometimes written on the heart.

…Look in the footwells of our steps,
the table corners rubbed smooth,
the marks on the walls where we have lived,
the fine and tired stitches in the clothing sewed and mended,
the careful fold of the shuck on the tamal,
the thumbprint curves of crepe paper flowers
trying to make “Canta” out of “Llores.”
Learn to read the eyes, the hands, the spine.
You must be like a detective, or a spy . . .
For they are out there.
Our stories.
To be read in the tracks of tears now made
into wrinkles on the face,
in the scars we carry with pride,

…Unveil our treasures from the attic.
Go find it, hear it, touch it, write it down.