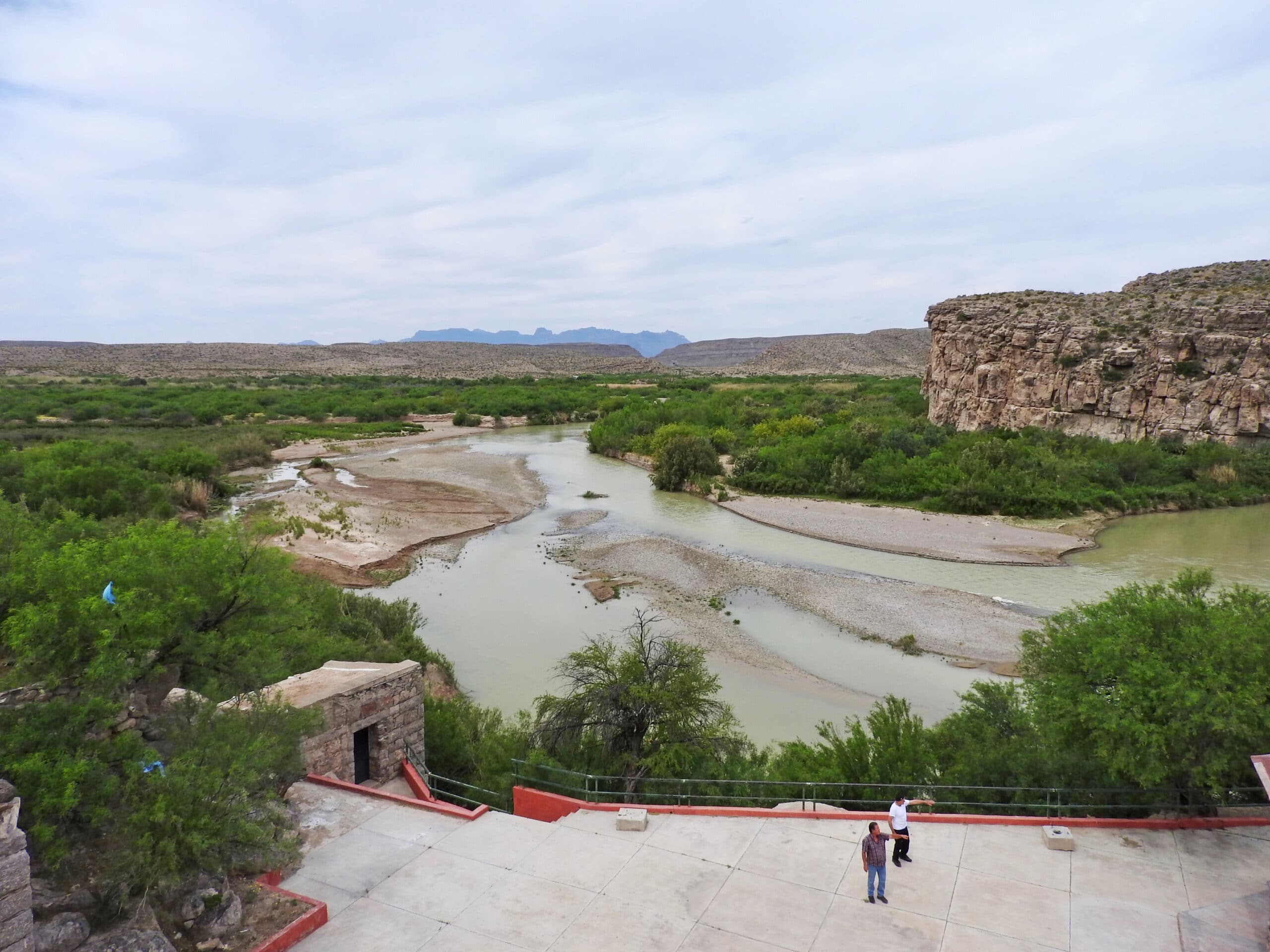 A River Runs Through It

As you approach the Boquillas International Ferry, it seems as though you’re traveling back in time. The ferry is actually a small rowboat that takes you from a checkpoint within the southeastern part of Big Bend National Park across the Rio Grande (Río Bravo to the Mexicans) to the banks of northern Coahuila, Mexico.

My husband and I, having lived in Alpine for nearly five years, have put off taking the trip to Boquillas del Carmen (or just Boquillas) for no good reason other than we just kept putting off getting our passports renewed. It was a beautiful April day, and with passports now in hand, we were excited about our trip to the remote, tiny village in Mexico.

After a brief stop at the checkpoint, we hiked to the river, where we were greeted by a man in a boat pleading, “Vámanos” (“Let’s move on”) while I was snapping photos. The $5 -per-person (free if you swim or wade) one-minute boat ride dropped us at the shore, where our choice of chariot awaited: burro, horse or the back of a pickup, all for $5 to $10 per person. It’s almost a mile to town, so on a hot day, $5 is a bargain.

To get the most authentic experience possible, we both chose the burro. My bumpy ride was provided by Vicente, and my husband’s burro was a fairly new mama with a youngster following along.

The mesquite-lined road that took us into town was almost hiding, as if to surprise us with what awaited upon arriving in Boquillas. Situated in the Sierra del Carmen Mountains, and resting on a high bluff above the Rio Bravo at the southwest end of Boquillas Canyon, the village is surrounded by such awe-inspiring natural beauty that at first you can do nothing but look out, long before you even notice the town.

Around the turn of the 20th century, Boquillas was a thriving mining town and had a population of approximately 2,000. When the mining ceased in 1919, the town’s population rapidly declined as most of the residents moved away for other opportunities.

Fast forward to the 1970s, when José Falcon opened a restaurant. Crossing the border was freely done back then with no documentation, so Boquillas again began to thrive. Even though the town still had no electricity and operated on propane, tourism became the main trade from visitors to Big Bend.

After 9-11, the crossing was closed indefinitely, and the population plummeted to fewer than 100, as the residents could no longer sustain their 20th-century way of living without tourists. In 2013, Boquillas’ port of entry was officially reopened, wit more enforcement but with high hopes for the people of Boquillas to come back, which they did. Wanting the tiny village to succeed, the Mexican government helped Boquillas get back on its feet by supplying funds for a solar farm, a medical facility, building supplies to restore their school and properties, and a single telephone line. Just over 200 people live in the village today, with the prime industry again being tourism.

Everyone gets a guide. The same guy who greets you off of the boat and introduces you to your burro stays with you the entire time, if you want him to. Whether for genuine hospitality, tips or to keep visitors in check, we liked having a guide. Ours was Esteban, who told us the history of the village and explained that the nearest town in Mexico is 160 miles away.

It was straight up noon and we were hungry, so José Falcon’s Restaurant was our first stop. Falcon’s outdoor patio sits above the Río Bravo looking north into Texas. Awesome view, simple delicious fresh food plus a giant margarita? Yes, please! While we were waiting for our lunch, we listened to a gentleman singing and playing guitar, then Esteban joined in. Maybe it was the music or the margarita or this little slice of heaven — but it was amazing.

Esteban was waiting for us when we finished lunch, and we explored the rest of the town. We bought some colorful handcrafted souvenirs from the vendors (set up by the women of the village) and ventured into the lone bar, where my husband ordered a Tecate and insisted it tasted different from the American brew of the same name. I was still too full from lunch for even one sip of beer, so I took his word for it.

Happy little kids run up offering treasures. There is zero vehicle traffic. Colorful buildings stand as if frozen in time in the constant stillness of the Sierra del Carmen.

This place is remote, rugged and wonderful. The streets are dirt, some of the buildings are dilapidated, and it’s tiny. So if you’re looking for lots of excitement and things to do, you’re out of luck, as the options are delightfully limited. If you need a grande double mocha latte, you won’t find one. If you need air conditioning to be comfortable, there isn’t any. If you don’t speak Spanish, it’s okay, but be prepared to get the side-eye from your husband while attempting to ask the waiter if the beans are vegetarian. (I ate them anyway.)

Visiting Boquillas is its own unique event, one that isn’t easily squandered. The people are warm and welcoming, and it’s obvious everyone is working toward a common goal.

We left Boquillas different people, feeling grateful for the modern conveniences we enjoy daily and in complete awe and admiration for the determination and spirit of the people who live in the village.

As we crossed the river back into Texas, we waved adiós and gracias and said we’d return soon. The people of Boquillas need us for their home to survive. I think we need them, too.

The Boquillas Port of Entry within Big Bend National Park, providing access to the town of Boquillas, Coahuila, Mexico, as well as the protected areas of Maderas del Carmen, Ocampo and Canon de Santa Elena, started 2019 summer hours of operation Friday, May 3.

Visitors can cross by foot (during low water) or by rowboat ferry (for a fee). This crossing doesn’t accommodate vehicle crossings or commercial importation of products.

Passports, passport cards or other official travel documentation are required.